Co-working and serviced office space has been getting more and more popular with tenants in Poland in recent years, with 2018 having seen a massive increase in take-up levels. The entire office sector is being transformed by the phenomenon. By Adam Zdrodowski

Ongoing dramatic changes in the way people work have been exerting a tremendous impact on the global office real estate market, with today’s tenants expecting more flexible space arrangements and leasing terms than ever before. Flexible space operators are responding to the demand by providing areas that take into account the various functions and functionalities of the modern office and are, in effect, “lifespaces” rather than mere “workspaces.”

According to a report published by JLL in November, the flexible office space (including serviced, co-working and hybrid space) sector in Europe has more than doubled since 2014 and is likely to grow by up to 30 percent annually over the next five years. The company’s forecast was based on an analysis of the 20 biggest European markets, including Warsaw. JLL data shows that the total volume of flex space in those 20 markets grew by around one million sqm in 2017. Another seven million sqm could be added by 2023.

Poland’s flexible office space market until recently grew by approximately 30-40 percent annually, while over the last year the growth rate has increased dramatically, to around 100 percent. Towards the end of 2018, the total stock of such space stood at more than 220,000 sqm. Warsaw accounted for some 75 percent of that volume. In the first three quarters of last year, flexible space operators leased as much as 91,000 sqm in the city (in the center their share of the total take-up has recently reached 25 percent), becoming an important driver of demand.

Interestingly, according to Savills data, in the Q1-Q3 2018 period Warsaw came second in Europe in terms of the volume of leased flexible office space. London was the leader, with its flexible space take-up having stood at more than 104,000 sqm. Notably, some of the biggest office lease transactions closed in Poland last year involved flexible space operators. They included the lease by WeWork of 14,200 sqm at the Mennica Legacy Tower project, which is now under construction in the Polish capital.

Flexible space today accounts for about 2 percent of the aggregate modern office stock in Poland, but as the sector gets more popular and operators keep expanding the figure could go up to some 5-6 percent in a few years, said Mateusz Polkowski, head of research and consulting at JLL. In Polkowski’s opinion, more brands are likely to debut in Poland in the near future. The country is becoming more and more attractive for flexible space operators from abroad due to its growing number of start-ups and the expansion of big international companies.

Over the last two years, co-working and serviced office space operators such as BOBO Coworking, New Work Offices, Spaces and WeWork have entered the Polish market, joining the likes of Business Link and Regus. Many operators active in Poland have expansion plans. Yotam Alroy, co-founder and chief business officer at Mindspace – an Israeli operator who entered Poland over a year ago – said that he sees great potential for the further growth of the company’s offer in the country.

Following the success of its first Polish location at Hala Koszyki in downtown Warsaw, Mindscape has recently decided to take up additional space at a neighboring office building and thus expand the co-working area it offers in the city to a total of almost 5,500 sqm. The newly added area is dedicated to teams comprising from 12 to 50 people. “We have noticed a growing interest in co-working spaces from larger companies and organizations,” Alroy explained.

Demand is also on the rise in the largest regional markets and operators will likely keep growing there in the coming years, too. According to Polkowski, Kraków and Wrocław – the two biggest office markets outside Warsaw – will be the main expansion targets. Hubert Abt, the CEO at New Work Offices, said that his company will this year open locations in Łódź, Kraków, Wrocław and Poznań, where it plans to take up a total of 25,000 sqm. In Warsaw, the operator wants to expand by 20,000 sqm in 2019.

The rapid growth of the flex sector has been driven by the new global trends in the labor market. According to Alroy, flexible office space has become a great response to the changing needs of employees, and the evolution or even revolution of our working style. “Today, people are more and more often looking for creative spaces available per hour, which boost cooperation and are a natural source of new business relationships and everyday inspiration,” he said.

Of a similar opinion was Eyal Litwin, the CEO of Adgar Poland, a company that apart from traditional space also offers two flexible leasing concepts – Brain Embassy and Beyourself – in its Warsaw buildings. “There are really many benefits of working in a co-working office operated by professionals. Our experience shows that people who have tried working in a co-creating space do not want to come back to a traditional, often monotonous office,” he stressed.

In the latter case, the various zones are already provided for at the design stage and a workspace becomes, in effect, a “lifespace.” Indeed, the growing popularity of flex offices with both small tenants and big corporate clients seems to corroborate their advantages. Contrary to common belief, it is not only start-ups and freelancers, but also big companies that use co-working and serviced office space, said Karol Wyka, leasing director at HB Reavis Poland, a developer who is also developing his own co-working concept; HubHub. 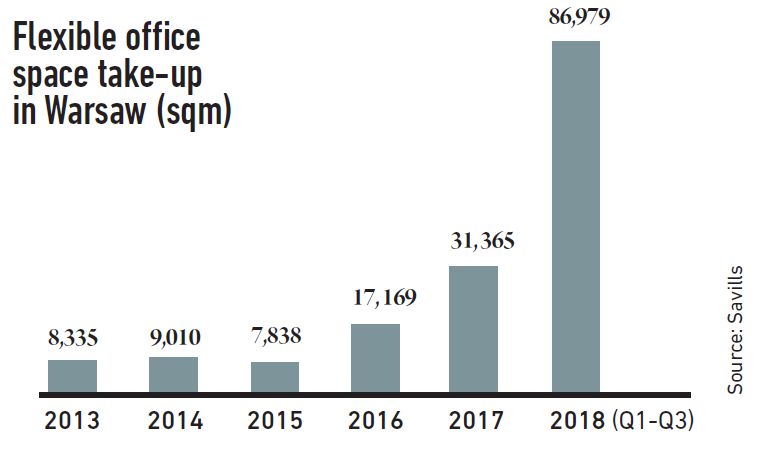 It is not yet clear exactly what the flex revolution will mean for the office property market. Will the level of demand for flexible space that is seen today be sustained in the long run and if so, how will the owners of traditional office space respond to that? Some of the operators who have announced new locations in recent months have leased space in buildings which will be delivered in one or even two years. “It is then that the moment of truth will come,” said Jarosław Pilch, head of tenant representation, office agency, at Savills.

He added that one could then possibly witness a consolidation of the market or a decrease in rental levels. However, “there will be no going back to the pre-coworking revolution era,” Pilch maintained. Indeed, there are already signs that some of the solutions found in flex offices are being or will soon be adopted by landlords and tenants of “regular” office areas. Expenditure on office fit-out, for one, will likely go up if traditional offices are to remain competitive.

In the opinion of Savills experts, one can already witness competition for tenants between flexible space operators and owners and developers of traditional space. The latter have started offering more flexible leasing terms and developing their own co-working brands. Additionally, inspired by co-working space operators, office building owners are now increasingly considering hiring community managers to boost building users’ satisfaction and to retain tenants. Thus, the flex revolution is significantly changing traditional offices, too.

“The distinction between regular office space and flexible office areas is increasingly being blurred,” Wyka claimed. According to him, the market for traditional space will be evolving towards greater flexibility. The option to sign shorter lease agreements and take up additional space if need be are seen as huge assets by today’s tenants. There will be demand for efficient, well-designed areas that can be shaped and developed more freely by those occupying them than before, Wyka argued.

WBJ begins cooperation with The Odessa...

Three quarters of this year's graduates...

63% of Poles want development of bicycle...

Illicit trade poses growing threat to governments and business
Polish economy returns to pre-pandemic state faster than German...
CLI for Poland down by 1.27% on annual basis and up by 0.15%...
Inflation in Poland is still highest in EU
get more news