Peak of the cycle or bump in the road? - Interview Economy

A dip in German exports and growing US-China tariffs are echoing in economies worldwide. How much is Poland exposed to the current downturn? Is there room for easing policies if things take a turn for the worse? WBJ talked to UBS’s Michael Bolliger about the potential risks and the outlook for the coming months 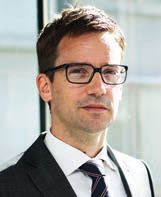 WBJ: The US-China trade war continues. Tariffs have been raised again. Where do you expect the conflict will lead?

Michael Bolliger: Since tariffs were first imposed early last year, President Trump has gradually implemented all those he announced. If this pattern is any guide, we have to expect a further increase in tariffs, following his statements made at the G7 meeting in Biarritz, France. However, history also suggests that the US president pays attention to the effect tariffs have on the US economy, business sentiment, and financial conditions. And there is also little evidence that he values predictability as part of his tariff policy. China has previously responded to US actions without escalating the conflict though. We believe China will avoid a hasty response going forward, but if the US follows through on its proposed tariff increases, China seems prepared to increase its measures in response. In sum, therefore, we need to assume that further tariffs will be implemented on both sides, but likely in a highly erratic and non-linear manner. Tariffs, and the uncertainties that come with them, will further weigh on global growth prospects, in our view.

There is tangible evidence that a downturn has already begun, with more and more alarming data coming from Germany. How much will it affect Poland and other CEE markets?

Poland and the rest of Central and Eastern Europe are highly exposed to these adverse growth dynamics. Recent data from Germany, which is by far the most important trading partner for the region, confirms that weak export growth is weighing on the economy. Germany’s GDP contracted by 0.1% (q/q) in the second quarter, in part because of the contraction in net exports. And most leading indicators point toward softer growth in the third quarter. This will also weigh on the growth outlook for Central and Eastern Europe, although to varying degrees. Poland looks most resilient, followed by Hungary, whereas the Czech Republic would suffer the most. We don’t expect any of these countries to enter recession, however, because domestic consumption is fairly strong and policymakers have room to step up easing measures going forward.

Thus far, Poland has enjoyed remarkable growth. Do you think it is just the peak of the business cycle or will the country withstand the negative signals from Europe and the US?

We expect growth in Poland to hold up comparatively well, partly thanks to robust private consumption. Labor markets remain fairly tight, which should add resilience to this important part of the Polish economy. In addition, EU funds are independent from the economic cycle, and absorption is likely to peak only in 2020-22 as the EU budget cycle ends. But Poland is not immune to developments elsewhere. Weakening growth in the US, the eurozone and China will all affect the Polish manufacturing sector – directly or indirectly – in the quarters ahead, and from there transition into private investment and consumption. As such, we expect growth to slow from around 4.2% this year to 3-3.5% next year. The risks are skewed to the downside, however, especially in the case of a further escalation of US-China trade conflict.

There have been signals that the Monetary Policy Council (MPC) may consider lowering interest rates if the global conditions continue to worsen. Do you think this is a likely scenario?

We expect more central banks to open easing taps in the months ahead. In Poland – and elsewhere in the region – inflation is likely to overshoot central bank targets, limiting the room for maneuver for the MPC. Tight labor market a limited slowdown in wage growth. Hence, we think the MPC will stay on hold for now, and only ease policy conditions in the case of a more rapid growth deceleration.

In UBS’s latest analysis, your colleague Mark Haefele wrote: “… it is true that President Trump could send the markets higher if he tweeted he is ending the trade war.” Do you think that the looming crisis could be mitigated by a shift in US policy? To what extent? Can so much depend on a simple tweet?

It is important to remember that private consumption holds up fairly well in large parts of the world. Unemployment is low and real wage growth remains positive. This is essential for our view that the US should be able to avoid recession in 2020. A credible announcement that the trade conflict between the world’s two biggest economies is over could therefore not only support sentiment in financial markets, it could eventually even revive trade and investment spending. Hence, a simple tweet can indeed change a lot, but it will be crucial that markets, politicians, and entrepreneurs consider it credible.