From union to union - Interview Politics

Poland and Lithuania have a long, common history; they even formed one country for over 200 years. Despite differing views on this history, the two countries remain closely linked. WBJ talked to Ambassador Eduardas Borisovas about Polish-Lithuanian history and current economic, political and military paths 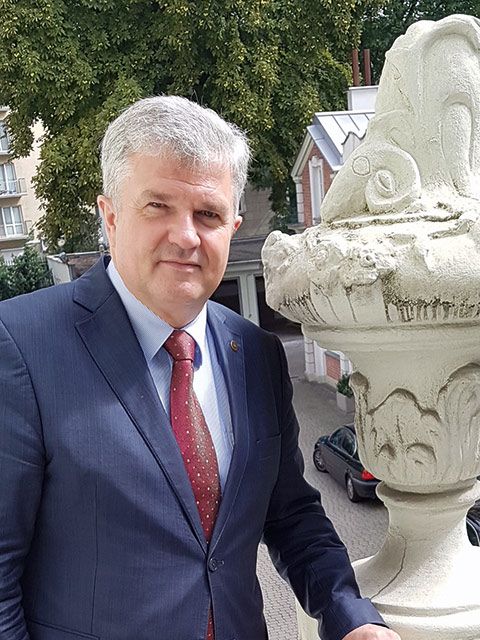 WBJ: The new President of Lithuania, Gitanas Nausėda, chose Poland for his first foreign visit and described this as a sign of how intense our friendly neighborly relations are after a period of “certain stagnation.” In Lithuania’s new coalition government, composed of four parties, for the first time two members of the EAPL–CFA party, which represents the Polish minority, were appointed to ministerial positions. How do you view our relations at the moment?

Ambassador Eduardas Borisovas: I think that we are witnessing a return to what may be termed a natural situation characterized by mutually close links shaped by our geography, security considerations, state of mind, history, culture and our role in European development. Lithuania has always been a multicultural country, with Belarusians, Poles, Jews and Lithuanians living there in various periods of history. Lithuania’s national identity and power was influenced by various nations and it developed and spread over large areas of Europe. Lithuania is now a democratic country that respects minorities, including Poles, which make up 7 percent of the population. The appointment of Rita Tamasuniene (family name Sadowska) as minister of the interior, and Jaroslaw Narkiewicz in the position of minister for transportation and communication – both of whom are members of parliament elected from a party representing Poles – proves the equality of all our citizens.

Will Lithuania regulate the issue of the Polish spelling of Polish names in Lithuanian documents, as demanded by many members of the Polish minority?

This issue should be resolved but for this to happen our Parliament needs to vote on it, which hasn’t happened so far. I think that the sooner the matter is resolved the better, but we have to be patient. Parliament has taken three different positions on this matter and it is deliberating on it, so let us wait. But the issue of putting Polish names on street signs in places largely inhabited by the Polish minority has been regulated positively.

In the past our view of the Union of Lublin was not univocal, some historians regarded it as a tool of Polish domination. Now it is regarded as a historical effort to build a union of two equal nations serving their interests and influencing European development. We were pioneers in creating such a law-based structure on our continent, so it is unsurprising that it is compared to the process of building a common union by so many European countries, all of which have had a different history and experience, to serve development and peace on the continent.

What will our cooperation within the EU look like, with the new Members of the European Parliament and the new people in high positions in the EU?

I believe that our cooperation will be very good; we have similar positions on various issues and there is a very high degree of support for the EU in our societies – the biggest among all member states. We will cooperate within the Three Seas Initiative group composed of 12 member states situated in the area between the Adriatic, Baltic and Black Seas in order to catch up with Western Europe in terms of infrastructure, better connectivity, transport, economic development and strengthening energy security.

Lithuania has 11 MEPs, who will be sitting in various EU parties and groupings, the majority of them will be in the European People’s Party. Our countries are glad that the European Parliament will not be dominated by Eurosceptic populists. We do not want to speed up the federalization of the EU, but we do wish to build a strong union, to speak in one voice on the international scene, particularly in relations with China and Russia.

Our countries will support the Eastern Partnership, which links states willing to join the EU, including, among others Ukraine, Georgia and Moldova. However, it will not be easy now in the EU to obtain a decision regarding financial support to build infrastructure linking Poland, Lithuania other Baltic States with the south of Europe, but all those projects will bring us many profits, especially in economic terms.

How are Lithuania and Poland intensifying bilateral economic and trade relations at present?

We have been intensifying them for the last few years. All the relevant talks are going very well in the Polish and Lithuanian ministries of energy. The gas pipeline connecting our countries will be ready this year. Next, the Polish-Lithuanian energy electricity interconnector and synchronization projects will integrate Baltic States with the European electro energy system. A ferry connection between Szczecin and Klajpeda is being considered. Poland is developing its investments in Lithuania and Lithuania is increasing its investments in Poland. Polish firms are importing products manufactured in Lithuania, like machinery and chemical products. Our countries will be involved and linked in building European interconnection infrastructure, such as Rail Baltica and Via Carpatia.

For Poland and Lithuania the problem of security and military cooperation is extremely important. We are both members of NATO and we cooperate in strengthening the Eastern flank of NATO. Lithuania also operates the Airspace Surveillance and Control Command system, which controls and defends air space over Lithuania and other Baltic states. What is the state of Poland’s and Lithuania’s cooperation between their military industries and military forces?

Lithuania and Poland have the same opinion about the importance of security on the Eastern flank of NATO. We see the threats posed by the imperial and aggressive policy of Russia, which was evidenced by the annexation of Crimea and the occupation of some eastern parts of Ukraine and before that with the occupation of parts of Georgia. We have drawn conclusions from this and our strong cooperation in the military field is the result of our common attitude towards such threats. NATO is aware of this. We have the NATO Multinational Corps Northeast in Szczecin, the Multinational Division North-East located in Elbląg and an air force base in Šiauliai in Lithuania, where our air force soldiers, Polish pilots and pilots from other NATO countries are serving 24 hours a day, 7 days a week policing our air space and that of other Baltic states. As President Andrzej Duda said during talks with our President Gitanas Nausėda during the latter’s visit to Poland: “the security of Lithuania is extremely important to us.”

Having said this, I wish to add that we do not want to see Europe divided into zones of influence. We want peace in Europe and we want Russia to act according to internationally recognized standards and law. We support the Eastern Partnership of EU with Ukraine, Georgia and other countries which aspire to join the EU. The EU should play a strong and important role in global policy and it should strive to ensure economic, social and human development for everyone.

You have been serving as ambassador of Lithuania to Poland since January of this year. What would you like to achieve between present-day Lithuania and Poland?

I wish to develop a better understanding of what modern life is like in our country. I understand that some Poles have a large sentiment for Vilnius, but I would like them to travel to the whole of our country; to visit all other places and to understand that many groups of people have influenced our culture – Jews, people from modern-day Belarus, Ukraine, among others. I would like to intensify cooperation between our universities and cultural institutions, to organize person-to-person exchanges on both sides. We remember our common history and we treat it as it is. There are Polish monuments in Vilnius and Lithuanian nobility palaces in Warsaw. Throughout our history we have had different moments and we went through them together and this is also the case now between contemporary Lithuania and Poland. We cooperate in all aspects and we are best friends in Europe.