In 2017, leasing companies financed investments of Polish companies with a total value of PLN 67.8 billion. The dynamics of the Polish leasing sector amounting to 15.7 percent proves that the Polish leasing industry has been developing much faster than its European counterparts. And 2018 will be the sixth consecutive year marked by a double-digit pace of its development. By Andrzej Sugajski

The dynamics of the Polish market is considerably higher than the growth observed by the whole European sector. In the last 12 months, the share of the Polish leasing industry in the European market went up from 4.4 to 4.8 percent. While in 2016 the leasing industry financed investments of Polish companies worth PLN 58.6 billion, in 2017 the corresponding rate was as high as PLN 67.8 billion. At the end of 2018, total financing provided by the Polish leasing industry may exceed PLN 83 billion (in the case of the assumed market dynamics reaching the level of 23 percent). Thus, 2018 will be the sixth consecutive year marked by a double-digit growth pace. The role of leasing in the creation of the GDP has been ever more important over recent years. At the end of 2017, the share of the leasing industry in the GDP accounted for 3.4% - twice as high as the EU average rate and higher than in countries with much more mature leasing markets and developed economy such as Great Britain, Germany, France or Spain.

A study conducted by SAFE published by the European Commission has shown that 60% of company owners from the SME sector declare the intention to use leasing. This is the third highest result in Europe, while the respective average rate for Europe is 48%. For Polish entrepreneurs from this industry, leasing is the most significant source of investment financing. According to the estimates of the Polish Leasing Association, the largest group of leasing customers, accounting for about 71%, are customers with turnover up to PLN 20 million. This group includes micro-businesses and small enterprises. 28.5% are customers whose turnover exceeds PLN 20 million, whereas individual clients make up 0.5%. In the public sector, the use of this form of financing is at a marginal level. 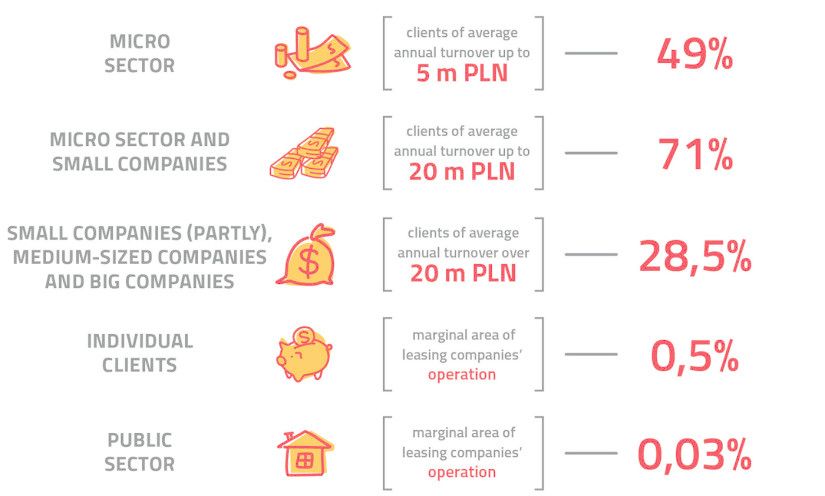 40% of small enterprises have used leasing services, whereby 81% of leasing customers are satisfied with that form of financing3. Such conclusions can be drawn from a study performed by CBM INDICATOR based on a Poland-wide sample of companies with a turnover rate no higher than PLN 5 million. According to the respondents, the most
crucial factors considered when choosing a leasing company included: price rates (73% believed that the price played a big or a very big role), openness for negotiation (69%) and a quick decision- making process (67%).

In 2017, the customers of leasing companies would typically purchase passenger and commercial vehicles and trucks up to 3.5 tones (45 percent share in the market structure), machines and other equipment including IT (27.2 percent) as well as heavy transport (25.9 percent). Other transactions included real estate (1.3%) and financing other assets (0.6%).

Assets financed by the leasing industry in 2017

Less than half of companies benefited...

PMI for Poland powerfully up in V

PMI for Poland powerfully up in V
‘Vegetable+’: ruling party seeks to create state-owned...
Passenger transport plummeted by 77% y/y in April
Business Leading Index slightly down in May: BIEC
get more news

Coronavirus with no significant impact on prices
Echo Investment awaits stable growth path
Cushman & Wakefield: forecasts for new normality in offices
Investments in Poznań up by 55 percent during year
get more news

George Floyd: Supporters show solidarity in Kraków, Warsaw
EC approves another €1.6bn element of financial shield
US breaks off relations with WHO
Poland last in Europe in terms of transition
get more news