On February 22-23, 2021, in Warsaw, the Sofitel Victoria Hotel hosted the 21st edition of the POWERPOL National Energy and Heating Congress, devoted to the development prospects of the Polish energy sector in the coming years, the main organizer of which is the European Business Center.

The Congress was covered by the Honorary Patronage of the Vice-President of the Council of Ministers, Minister of State Assets Jacek Sasin, Vice-President of the Council of Ministers of the Minister of Development, Labor and Technology Jarosław Gowin, Minister of Climate Michał Kurtyka, President of the Energy Regulatory Office Rafał Gawin, Chairman of the National Economy Committee Krzysztof Tchórzewski, National Fund for Protection Of the Environment and Water Management, the National Center for Research and Development, the Office of Technical Inspection, the Energy Market Agency SA, the National Institute of Distributed Energy, the National Chamber of Biofuels, the National Energy Conservation Agency, the Polish Electricity Association, the Polish Electromobility Association, PTPiREE, the Polish Society of Professional Combined Heat and Power Plants, Polish Association of Automotive Industry, Polish Association of the Photovoltaic Industry - Polska PV, Association for Renewable Energy, Society for the Development of Small Hydropower Plants, UPEBI. On the merits, the Congress was supported by experts from PwC Polska. 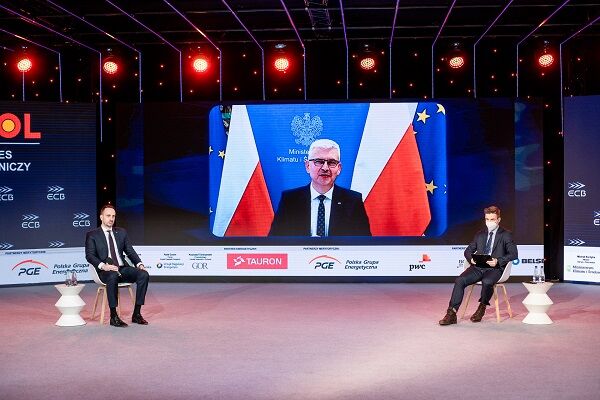 During the Congress, six discussion panels took place on the subject of energy transformation, renewable energy in the portfolio of Polish market leaders, the Polish gas and fuel energy market, the potential of the heat and cogeneration market, innovation, development, and investment in the horizon until 2050 and the potential of Polish producers for the needs of the RES segment.

The 21st edition of the Polish National Energy and Heating Congress POWERPOL was officially inaugurated by Ireneusz Zyska, the Secretary of State and Government Plenipotentiary for Renewable Energy Sources at the Ministry of Climate and Environment, who presented the participants with the most important challenges currently facing the Polish government and the goals set for the sector energy, gas, heating and renewable energy sources in the National Energy Policy until 2040.

After the official speech, there was an inaugural debate entitled "Energy Transformation 2021". The panel was led by Wojciech Jakóbik - Editor-in-Chief, BiznesAlert.pl, and the discussion was attended by Małgorzata Jarosińska-Jedynak - Secretary of State, Ministry of Funds and Regional Policy; Janusz Kowalski - former Secretary of State, former Government Plenipotentiary for the Reform of Ownership Supervision over State Treasury Companies in the Ministry of State Assets; Piotr Naimski - Secretary of State, Government Plenipotentiary for Strategic Energy Infrastructure; Ireneusz Zyska - Secretary of State, Government Plenipotentiary for Renewable Energy Sources, Ministry of Climate and Environment; Robert Tomanek - Undersecretary of State, Ministry of Development, Labor and Technology; Dorota Dębińska-Pokorska - Partner, Leader of the PwC Energy Group; Artur Michalski - Deputy President of the Management Board, NFOŚiGW; Igor Wasilewski - President of the Management Board, PERN S.A. The speakers started the discussion by discussing the Green Deal and the Reconstruction Plan for Europe from the perspective of the Polish raison d'etat and global trends in the energy sector. In this context, reference was also made to the European energy sector after the global pandemic, in particular the issue of building a nuclear power plant and the need to use gas in all installations operating at the base. The next part of the debate referred to the plans for the coal sector and coal energy as well as climate neutrality in relation to the priority directions of the government's activities. At the same time, attention was paid to the basic challenges related to the consolidation of the Polish energy sector. The invited guests also referred to the NordStream and Baltic Pipe projects. In the last part of the discussion, the National Fund for Environmental Protection and Water Management (NFEPWM) programs for the development of prosumer energy were discussed, as well as renewable energy in investment projects of energy companies, as well as nuclear energy in Poland. Attempts were made to answer the question of how to ensure social acceptance for the new shape of the energy sector. 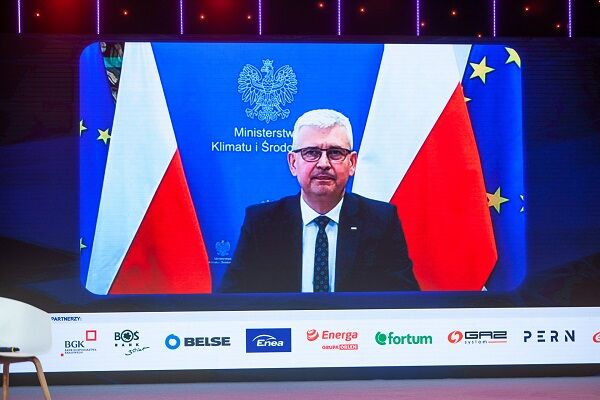 In the third panel entitled "Heat and cogeneration market" responsible for moderation was Maciej Bando - former President of the ERO, Member of the Program Council of the ECB, and the debate was composed of: Vasco Amaral Cunha - Credit officer, public sector, Poland and the Baltic States, European Investment Bank; Rafał Gawin - President of the Energy Regulatory Office; Arkadiusz Kosiel - Member of the Board, Director of Tariff Regulation and Management, Fortum Power and Heat Polska Sp. z o.o .; Artur Michalski - Deputy President of the Management Board, NFOŚiGW; Andrzej Modzelewski - Member of the Management Board for Infrastructure, Innogy Polska S.A .; Paweł Stańczyk - Chairman of the Board, PGNiG Termika S.A .; Marek Wesoły - Member of the Polish Parliament, Deputy Chairman of the Parliamentary Group for Energy. The debate first referred to the place of cogeneration in the assumptions of the European Green Deal: RED II, and the role of gas in the system and individual heating was also important. Then, the possibilities of increasing energy efficiency in the heat production process (electrification of heating: cogeneration, trigeneration) were discussed, and in a broader perspective, an attempt was made to answer the question of how to rationally remodel the heat market. The next part of the panel was devoted to the scale of development of prosumer systems and their impact on district heating, in particular, the speakers were interested in whether prosumer energy is an opportunity or a threat to the development of district heating. Finally, the participants of the debate devoted a lot of attention to the issue of abandoning coal in the context of rising EUETS prices and the impact of the withdrawal from coal on the price of heat at end-users, especially in smaller towns. 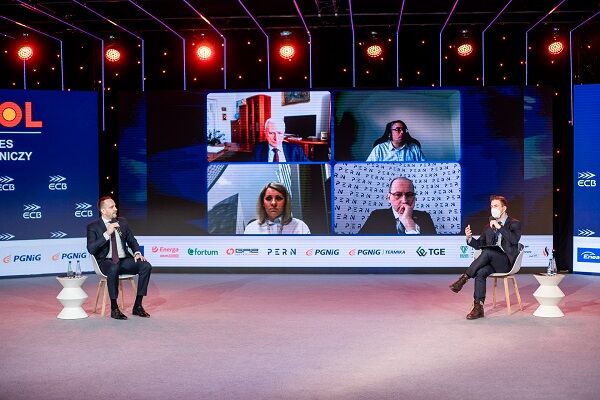 Panel IV entitled "Horizon 2050: Development, investments, innovations", moderated Izabella Żyglicka - Ombudsman for Entrepreneurs at the Regional Chamber of Commerce in Katowice, Legal Advisor, Managing Partner, Kancelaria Żyglicka i Wspólnicy. The speakers were: Jarosław Bogacz - President of the Management Board, POLENERGIA OBRÓT S.A .; Jarosław Głowacki - Member of the Management Board, Vice President of the Management Board for Technical Affairs, PGNiG Termika S.A .; dr inż. Wojciech Kamieniecki - Director, The National Center for Research and Development; Filip Kowalski - General Manager for Energy & Natural Resources, SAP Middle Eastern Europe; Roman Masek - Technical Director, BELSE Sp. z o.o .; Paweł Pisarczyk - Chairman of the Board, Atende Industries Sp. z o.o. In the first part of the panel, the invited guests discussed the possible paths for the development of future technologies - on the one hand, it was analyzed whether hydrogen could become a fuel used in the longer term on a larger scale, and on the other, the potential of nuclear energy in terms of energy demand in Poland was discussed. The conclusions made it possible to answer the question: are the new technologies a complement or the core of changes. At the same time, the ways of modeling pro-ecological behavior and whether the Clean Air Program is capable of developing such behavior were discussed. The second part of the discussion referred to the effects of the "Green Deal" and "Energy Transition" on the entire economy. In this context, the basic development trends of investments, project financing, and investment barriers were analyzed. It was also noted that investing in innovation is also of crucial importance, therefore the Start-up Program was analyzed, in particular, it was considered how Polish enterprises used the potential and know-how of the market. Finally, the issue of prospects for the development of electromobility was discussed.

The fifth panel was entitled "The potential of Polish producers for the needs of the RES segment" - Mariusz Wójcik - Head of the Marine and Renewable Energy Team, ILF Consulting Engineers Polska Sp. z o.o. and the following people were invited to the discussion: Włodzimierz Ehrenhalt - Vice-President of the Board, Renewable Energy Association; Jakub Faryś - Chairman of the Board, Polish Automotive Industry Association; Ewa Malicka - Chairman of the Board, Society for the Development of Small Hydroelectric Power Plants; Mariusz Samordak - Director of the Energy Sector and Technology Office, Bank Gospodarstwa Krajowego; Adam Sikorski - Chairman of the Board, UNIMOT S.A .; Janusz Sterna - Vice President of the Management Board of Columbus Energy S.A .; Bogdan Szymański - Chairman of the Board, Association of the Photovoltaic Industry - Polska PV; dr inż. Andrzej Wiszniewski - President of the Management Board, National Energy Conservation Agency S.A. The debate was divided into three parts. In the first one, the potential of Polish producers of RES installation components and the possibilities of becoming a leader in the segment of distributed and prosumer energy by Polish producers was discussed. In the second part, the directions of development of photovoltaics and e-mobility were analyzed. Finally, the topic of local governments was raised as a desirable but difficult business partner. In conclusion, the speakers were asked whether Poland could become a leader among producers of wind energy components. The element that, according to the speakers, significantly affects the scale and pace of development of Polish enterprises is the stability of regulations in the field of renewable energy.
1500 people registered their participation in the POWERPOL Congress on the online conference platform within two days.
The twenty-first edition of the National POWERPOL Congress was supported by a large group of partner companies and media partners who were involved in the preparation of the above-mentioned project. The European Business Center, the main organizer of the Congress, would like to especially thank the Energy Partner, TAURON Polska Energia S.A., Content Partners: PGE Polska Grupa Energetyczna S.A. and PwC Polska, Partners: Bank Gospodarstwa Krajowego, Bank Ochrony Środowiska S.A., Belse Sp. z o.o., ENEA S.A., Energa Grupa Orlen, Fortum Power and Heat Polska Sp. z o.o., Gas Transmission Operator Gaz-System S.A .; PERN S.A., PGNiG S.A., PGNiG Termika S.A., Towarowa Giełda Energii S.A., Office of Technical Inspection, thanks also to the European Investment Bank and Polska Spółka Gazownictwa Sp. z o.o. for cooperation within the Congress.
European Business Center would also like to thank the Media Patrons: Portal BiznesAlert.pl; CIRE.PL Energy Market Information Center; Portal CEO.com.pl, Portal elektroinzynieria.pl; Portal Energetyka24, Magazyn Energetyka Cieplna i Zawodowa; The portal energetykacieplna.pl; Energy Hydro Magazine; To the Energetykon.pl portal; Euractiv portal; The portal inzynieria.com; Direction-energetyka.pl portal, Law Business Quality magazine; MBrokers portal; Nowa Energy warehouse; The Nuclear.pl portal; OZEON Portal, Smart-Grids.pl Portal; Environment.pl portal; Strategie i Biznes, Świat Elit magazine; To Teraz-Srodowisko.pl; Warsaw Bussiness Journal, Wiadomości Naftowe i Gazownicze; To Wysokienapiecie.pl portal.
powerpol