FROM AWARD-WINNING STORIES TO RECORD-BREAKING SALES, POLAND HAS GARNERED A REPUTATION AS A HUB FOR WORLD-CLASS VIDEO GAME STUDIOS BY OWEN WILLIAMS

Game development in Poland has gone from strength to strength since its birth in the early 1990s following the fall of communism and subsequent access to world media. The founding fathers of the industry — CD Projekt RED and Techland — have become world-leading creators, while the country now boasts more than 440 games studios, from those global players to indie developers. The Polish video game market is estimated to be worth €470 million according to the Polish Agency for Enterprise Development (PARP), with 96% of productions exported to foreign markets. More than 10,000 people are employed by the industry nationwide and the number of consumers (regular gamers) totals around 16 million. Game titles released by Polish studios are becoming more numerous and successful. So what is it about Poland that has made the country a center for world-class game development?

There are a number of factors that have contributed to the success and strength of Poland’s gaming industry. The Polish education system places great importance on mathematics and engineering. These subjects are popular in the — heavily-subsided or free — country’s universities, many of which have excellent reputations. Couple that with the high level of consumer interest in gaming, the lucrative potential of a career in programming and development, plus the knowledge that Polish games can attract a global following (a belief held and proved time and again since the success of CD Projekt RED’s “The Witcher” in 2007), and you’ve got the formula for creating top talent. According to PARP, there are currently 60 degree courses aimed at game development on offer, with 26 of these focusing on programming. It’s also worth noting that this top talent is mostly multilingual, with no barrier between them and a Western audience.

Jacek Głowacki, head of business development at Polish video game developer and publisher Draw Distance, told the WBJ that the bar is set very high for game developers in Poland. He explained that a history of needing to find solutions to accessing content from the West at minimal cost (during the transformation era of Poland, when content was available but financially difficult to access) and the importance placed on mathematics/science education have created “a specific mindset [in Poland], which helps us deliver maximum effort with minimum possible costs as a rule of thumb.” 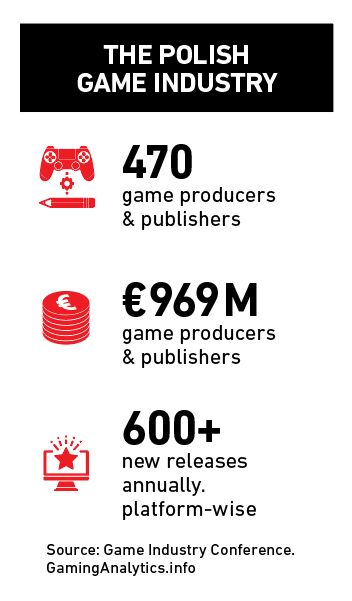 As yet, none of the big game corporations have opened a large studio in Poland — leaving Polish companies with the country’s entire talent pool to choose from. Some Poland-born gamedevs do join companies overseas, but the quality of domestic studios means that most stay close to home, preferring independent companies to global corporations. Indeed, Poland also attracts talent from abroad, with many high-skilled people, especially from Ukraine and France, working for Polish studios. The WBJ asked Paweł Marchewka, founding father and CEO of AAA games producer Techland, how the international gaming community views game developers from Poland. “We have earned the trust of players. Many Polish developers, who release great games, are known around the world. I think at this point, Poland is known as a place some of the best games come from.” Speaking of the way Polish developers have garnered such a good reputation around the world, Głowacki added, “Polish devs are disciplined, focused on achieving the goal and providing the highest possible quality level … making sure that every layer of the game and gameplay is crafted to the best it can be and works well together in the final product.”

Recognizing the national interest in the gaming sector and the international opportunity and importance it holds for the Polish economy, the government has issued more than PLN 300 million in finance for new gaming projects. This money, collected through EU-funding, is specifically aimed at helping up-and-coming studios launch their projects. The industry is clearly a good one for investment, with 42% of Polish people being video game consumers, giving the Polish consumer market a value of $596 million in 2020. Moreover, the Polish gaming community is known for its inclusivity — 47% of Polish gamers are female, a trend that is on the increase globally.

The domestic market is significant in attracting people to a career in gaming but the international market is staggering. With 96% of Polish games being played by a foreign audience and the global value of the video games market set at around $160 billion in 2020, it’s clear why Poland’s video game studios are attractive to investors. In response to the strength of the sector and its potential for further growth, the Warsaw Stock Exchange (GPW) opened a new index just for gaming called WIG.GAMES in 2019. CD Projekt consistently dominates the index. As of the end of 2020, GPW had 54 games studios listed, making Poland overtake Japan to become the leader in terms of the number of games producers nationwide.

The importance of video games to the nation has been further instilled by the move to include 11 bit studios’ game “This War of Mine” to the reading list of schools. The game is loosely based on the Sarajevo conflict, told from the perspective of a civilian. It’s a prime example of how video games are increasingly becoming an art form, with deep value on top of their fiscal gains. This is the first time a game has been included in the national curriculum and an idea that will only further the interest in games development among young Polish people. 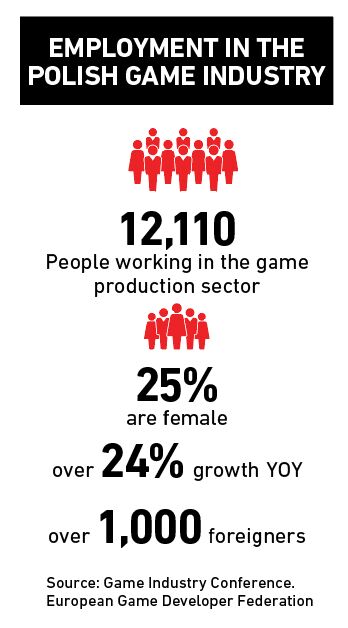 As well as being included in literacy classes, “This War of Mine” received worldwide praise and won many awards. Explaining the importance of video games and the stories they contain, Paweł Miechowski from 11 bit studios said, "A game can offer the same kind of experience as seeing a drama in the theatre and going through catharsis."

Poland’s rich culture, history and geography lead well for game inspiration. In particular, literature has influenced some of the industry’s most successful titles — “The Witcher” series is based on Andrzej Sapkowski’s novels. So, in the gaming world, Poland is often seen as an attractive place for its storytelling and a promising market when considering economic factors.

Poland’s success in the video gaming world is far from over. The country’s studios have proved themselves time and again, resulting in a mature market that still fosters new enterprises. Foreign interest and government backing can make the industry grow further into a national brand, capitalizing on the success of previous games and the potential of the nation’s talent. The country currently has the ideal combination of highly experienced and educated creators, capital market backing and government support to take Poland to even greater heights in the video games world. As Bartłomiej Piekarski, head of IR at leading mobile games studio Ten Square Games, told the WBJ: “The gaming industry is great in bringing together creative arts and STEM competences. Poland has been lucky to be strong in both these fields. This makes the gaming community in Poland so powerful as it’s based on the ecosystem that supports constant growth.”

Panattoni acquires 35 ha of land for...

The city of Tczew plans to introduce...

Wizz Air will fly from Katowice to Yerevan
IBM is cutting 1.5% of its global workforce
Half of Poles occasionally buy in second-hand shops
LPP to launch distribution center in Romania
get more news

Space for interest rate cuts may emerge in '24 or late...
EY: Poland’s GDP to grow 0.5% y/y, interest rates to remain...
EBRD invested record €990 mln in Poland in 2022
Muller: No work is currently underway on extending credit holidays
get more news

Polish direct investment in Ukraine could rise to $30bn over...
PKO BP issues three-year bonds worth EUR 750 mln
PlayWay starts book building for sale of up to 33.43% of Movie...
Virgin Orbit invests $5mln in SatRev shares
get more news

Greeks have the oldest cars in the EU; average age 17 years...
Inflation in Venezuela falls to 234%
Brazil and Argentina plan to create a common currency – media
Sanna Marin to be next president of European Commission?
get more news

Controversial influencer arrested thanks to pizza and Greta Thunberg

8 Essential wines for your holiday table