Several very large lease agreements have been signed in Warsaw’s office property market this year. The number of companies able to take up tens of thousands of sqm of space remains limited, but could we see more big deals in the coming months? By Adam Zdrodowski

The Polish office real estate sector has been putting up a very strong performance – evidenced by high supply and demand volumes in both Warsaw and the biggest regional cities – for several years now, but the boom seems to have gained a new dimension in recent months. This has been a year of spectacular lease transactions, enabled by companies’ growing space requirements and some tenants’ decisions to consolidate offices and take up larger areas in the new office skyscrapers currently being built in the Polish capital.

Banking group mBank in July finalized its lease agreement for 45,600 sqm of office space at the Mennica Legacy Tower project, which investors Golub GetHouse and Mennica Polska are now building in the Wola district of Warsaw. This is the biggest lease deal to have ever been signed in Poland’s office property market. As a result of the transaction, which was brokered by Colliers International and Cresa, the scheme – offering over 65,600 sqm of office area – is currently fully commercialized.

Also in the city’s Wola, insurance company Warta in June took up almost 20,000 sqm at Ghelamco Poland’s ongoing Warsaw Unit development. The over 200-meter investment will comprise approximately 57,000 sqm of office space and will be ready in a year and a half. In May, the same developer signed up another major financial institution – Getin Noble Bank – for its under-construction The Warsaw Hub project. The tenant will occupy almost 18,500 sqm at the 113,000-sqm mixed-use scheme and will move there in the second half of 2020.

Meanwhile, an existing office skyscraper in Wola, the Warsaw Trade Tower, has kept another big insurer, AXA. The company in July renewed its lease agreement for nearly 13,000 sqm of office space at the 45,000-sqm building and will stay there until 2030. Last but not least, lender Bank Gospodarstwa Krajowego (BGK) in July leased 12,400 sqm of office area at the 144,000-sqm Varso Place mixed-use development, which HB Reavis is now constructing in the downtown of the Polish capital.

According to JLL data, approximately 406,000 sqm of office space was leased in Warsaw in the first half of this year. The lease volume recorded in the Polish capital in Q2 2019 – standing at over 265,000 sqm – is the highest quarterly volume in the market’s history. The most office area was taken up in central locations and in the city’s Mokotów district. The vacancy rate decreased to 8.5 percent at the end of H1 (the lowest level since 2012) and is expected to see further compression in the near future.

While last year saw an increased leasing activity of flexible office space operators, this year has so far been marked by the activity of the biggest tenants, with the demand having been mainly driven by companies from the BFSI (banking, financial services and insurance) sector. Experts point out that the availability of large office areas within one building in a situation when a number of office towers are now under construction in Warsaw has led those companies to rethink their lease strategies.

Indeed, some of the biggest transactions signed in the city in the last few months are the result of consolidation processes. Real estate advisors argue that if properly advised, large tenants have, generally speaking, this year been able to secure very favorable leasing terms. “This is a very good moment – never before have we seen such a large volume of planned office space in very attractive locations,” claimed Artur Sutor, head of the office department at Cresa Poland. 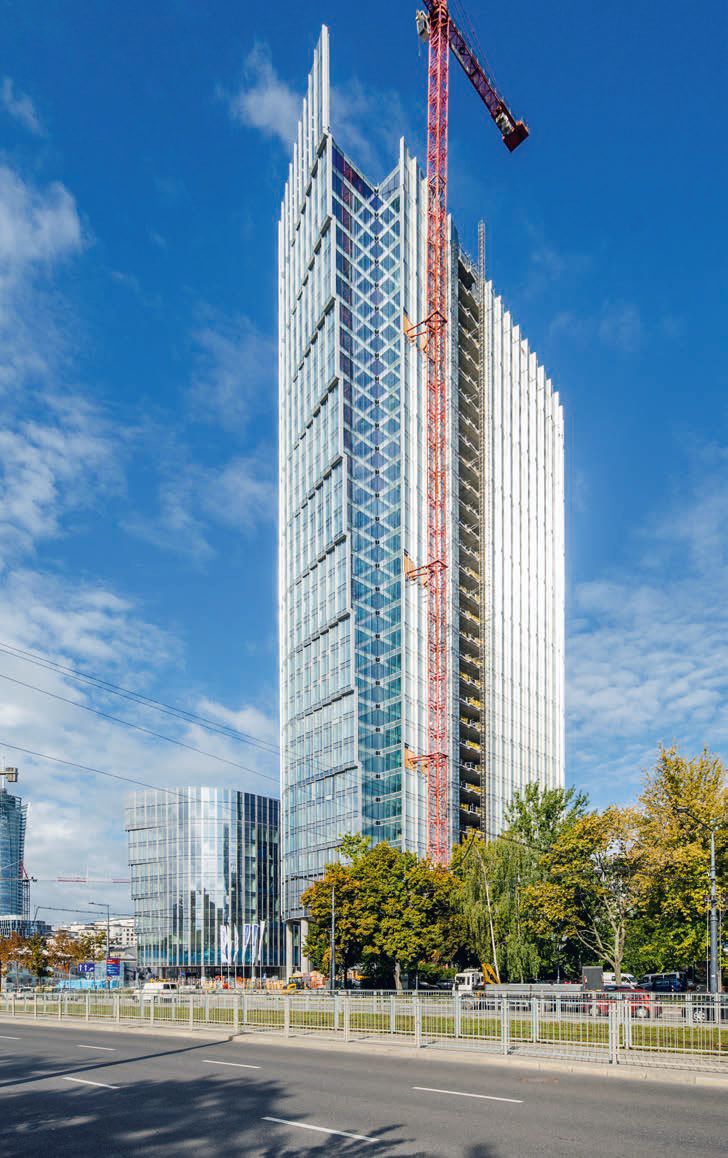 mBank's take-up of 45,600 sqm at the Mennica Legacy Tower project is the biggest lease deal to have ever been signed in Poland’s office property market

Although very few in number, these occupiers are instrumental in shaping the “configuration of power” in the office property market. “Securing such a tenant gives an office building owner the sense of financial security for many years,” Sutor noted. According to Mateusz Polkowski, head of research and consulting at JLL, the group of very big tenants, generating demand totaling 15,000-20,000 sqm or more, is growing. Admittedly, those tenants do not always decide to lease the space they need in a single building.

Nevertheless, in Polkowski’s opinion we will yet see a number of major office lease transactions in both Warsaw and regional cities this year. He pointed out that many of the biggest tenants are expanding within their current locations or into new locations in Poland. This is well visible in the BPO/SSC sector, which is behind many of the largest lease deals signed outside the Polish capital. JLL data shows that in H1 2019 the sector accounted for almost 190,000 sqm of leased office space in Poland, a fourth of the period’s total volume.

Much as transactions signed in such markets as Kraków, Wrocław and the Tri-City – where business services companies account for a bigger share of the aggregate lease volume than in Warsaw – are smaller than the biggest deals in the Polish capital, they can still be impressive. According to Colliers International data, three of the ten biggest office lease agreements signed in Poland in the January-July period were closed outside Warsaw (see table). The largest of them saw Sabre taking up almost 16,000 sqm at Tischnera Office in Kraków.

WBJ begins cooperation with The Odessa...

Three quarters of this year's graduates...

63% of Poles want development of bicycle...

Illicit trade poses growing threat to governments and business
Polish economy returns to pre-pandemic state faster than German...
CLI for Poland down by 1.27% on annual basis and up by 0.15%...
Inflation in Poland is still highest in EU
get more news