With AI to conquer the world

Will the new government make Polish fintechs have to look for markets in South America? WBJ talked with Paweł Wągrodzki, president of the board at LepszaOferta.pl SA, about changes in the industry and future opportunities BY KRZYSZTOF MACIEJEWSKI

WBJ: What is the mood in the industry after the recent parliamentary elections in Poland?
Paweł Wągrodzki: The result accurately reflects expectations, but many things remain unknown. As a fintech company working closely with non-banking companies, we are awaiting the next amendment to the anti-usury act with considerable concern. Previous changes in regulations have already caused a lot of reshuffling on the market, and in the case of the currently planned regulation there were two versions of the document. The first was widely consulted socially and contained compromise provisions. Unfortunately, the second one contained such a drastic reduction in the allowable margins of loan companies that it will probably affect the entire market.

So what does LepszaOferta.pl SA plan to do in this situation?
In this situation, we are looking for investors and new areas of expansion. This is quite a natural operation for technology companies at a certain stage of development, and I must admit that we have recently attracted considerable interest from Spanish investors, as well as a company in Israel. Discussions are at a very advanced stage. For this reason, it is already possible we will appear on European markets, including the Spanish and Ukrainian markets, where the first talks with potential loan companies are underway. In a slightly longer perspective, we are also thinking about Asia and South America.

Aren’t the legal or cultural barriers too much of a challenge there?
We are a technology company, so our business model is based on new fintech solutions. Thanks to this, the implementation of solutions does not require large expenditures. We have experience in this as one of the first fintechs on the Polish market that has created its own API infrastructure for contacts with financial entities. This solution also significantly facilitates contacts with people in need of a loan and we are working on its greater functionality based on AI and machine learning. I think it will be a revolution because the system will allow the monitoring and validation of scoring models in the background, thanks to machine learning. It is a mechanism that only the biggest players in the financial market can dream about at the moment.

So you are not abandoning your expansion plans on the Polish market?
Not at all. Until now, banks have been slightly less willing to use the opportunity to cooperate with technology companies such as ours, but completing the implementation of the requirements of the PSD2 Directive will definitely change something in this matter. But other industries that can benefit from our solutions, such as energy and telecommunications, in our area of interest.

And you don’t have any worries about overregulation in these industries…
We have to deal with many obstacles, and probably more will appear. I have heard about the idea of imposing ZUS contributions on AI – I hope that this will not happen, although on the other hand, I wonder what it would look like. 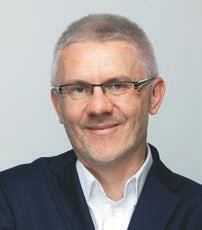