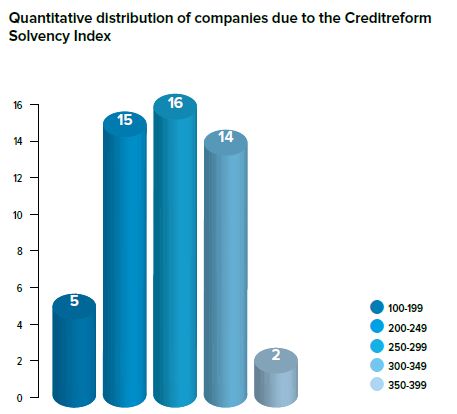 According to the Creditreform Polska analysis, 9.62 percent of the companies representing the TSL industry have excellent payment ability (100-199). 28.85 percent of all companies, in turn, have a very good (200-249) credit standing. By contrast, the worst paying ability (350-399) can be observed in case of 3% of all companies. The average bankruptcy probability(PD) measured by the median is 1.42%. Only 36.54% of the surveyed companies regulate their payments on time, while the rest regulate them with a slight delay. Moreover, in some cases, it can be concluded from the balance sheet analysis that liquidity remains at risk. It is, therefore, not surprising that only 3.85% of the surveyed entities are recommended for cooperation, and 7.69% is the percentage of companies that made acceptable business connections.

The TSL services market includes transport-forwarding and logistics companies with a very diverse range of offered services. Entities operating in the TSL industry are diversified in terms of ownership, organization or capital. There are small and medium- sized enterprises, specializing in transport of specific cargo groups, acting independently or as subcontractor for logistics operators, as well as larger entities, such as logistic operators. The latter often operate on an international scale. In the sector, one can also distinguish warehouse centers, as well as national public operators like Poczta Polska. We can finally include ports and airlines, sea and river seasons, shipping or even logistics exchanges. The TSL market is systematically adapting to the changing market conditions. Advanced IT systems, that used to be a novelty, are a standard today. The most important logistics companies on the market are constantly developing and expanding the range of offered services. The TSL sector is often perceived as a kind of economic barometer.

The estimated turnover of the surveyed companies exceeded PLN 18 billion in 2018. However, it should be noted that some entities reported incomplete data or presented data from the previous year. That said, historical data shows that the whole industry has been noting a double-digit revenue for the last couple of years. This is a clear indicator that the Polish transport market is growing year by year, increasing its competitiveness against other European countries. It has been confirmed not only by the data provided by the Central Statistical Office (GUS), but also by the European statistics prepared by EUROSTAT. According to them, Poland is one of the largest logistics markets in Europe, and the Polish road transport sector accounts for 15.7% of the entire EU market. 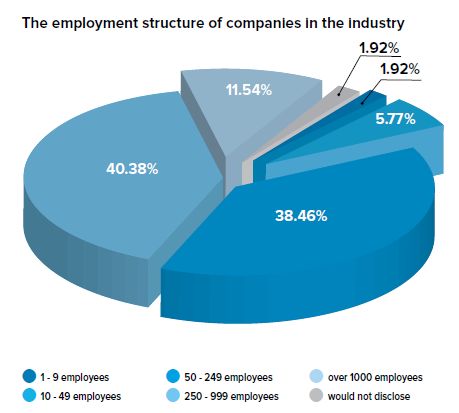 Despite the fact that carriers are still striving to expand their fleets, the most serious barrier to development in recent times is the shortage of drivers. The Transporeon research suggests that almost half of the transport companies surveyed in Poland, and as much as 59% in the entire European Union, are afraid of a deficit of employees. Not much less, because 48% of Polish respondents said they also feel the effects of rising fuel prices. It is estimated that there is a deficit of approx. 100,000 (20%) drivers. What's more, the average age of drivers in the international transport is 50 years, which means that many of them will soon retire. Despite rising earnings, there are still shortages, which may indicate that the problem will be deepening. Such a situation will affect both transport capacity on the market and freight costs. For this reason, Polish companies seek help in employing foreign workers, causing the average employment rate in the land transport sector to grow.

Warsaw at forefront of beneficiaries...

New orders in industry down by 5.3% y/y in VIII
Consumer climate index down to minus 17.7 pts in September
Production of industrial enterprises up by 1.5% y/y in August
World GDP not as bad as expected
get more news

As many as 1,136 new cases of coronavirus reported - most since...
Sculpture and medals exhibited at Colliers Office Gallery
Coronavirus to reduce pensions of hundreds of thousands of...
Employers getting ready for second wave of coronavirus
get more news

Warsaw at forefront of beneficiaries of IT industry development
ROBYG receives building permit for Modern Space R
Every third person planning to buy apartment changed these...
2020 to be record year in terms of planned office space in...
get more news

Mandaryna returns to her former producers

‘Once upon a time I couldn't dream’: YouTube influencer

'This time made me realize that some things are unnecessary': actress